A couple of weeks ago I wrote a post lamenting the relatively small amount of training that I’d done in 2013 versus what I’d done in 2012. Over the last 3 or 4 weeks, though, things have started to pick up a bit and I’m starting to get a bit more training done. This is probably down to two three main factors:

We’re almost at the end of April now and, as you can see from Fig. 1 (below), this month has seen me swim almost twice as much as I did in either January, February or March. I put this down to a combination of 1., 2. and 3. above… 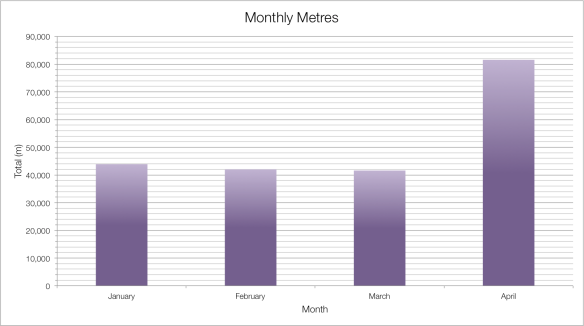 One of my major issues last year was that I took off like mad right at the beginning of the year, I built up very quickly from a <5 km week (with not a lot of base training from 2011) to a >50 km week in just one month and then very quickly crashed and burned. I got quite sick and demotivated and could hardly swim for a few weeks, and even when I did start back it was a slow start and never really went anywhere for the rest of the year. This year has been very different: I started off slowly (from a good base of swimming in late 2012) and had two strange up-down cycles but have now started to maintain modest but more consistent mileage which, I might add, consists of much better quality training than anything that I did last year. You can see the comparison between my weekly training distances from 2012 and 2013 in Fig. 2 (below). 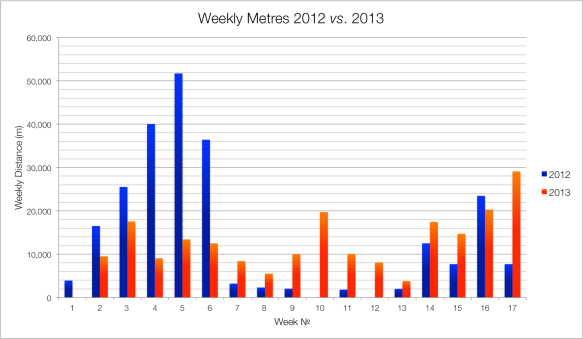 Now, with the water warming up and the long days, open water can start to contribute much more to my training. I have easy access to open water with the River Blackwater and Knockananig Reservoir right on my doorstep – both of these are “open all hours” venues and are free of charge so I intend to make great use of them! Also, my open water training should be of much better quality than ever before with my new FINIS Hydro Tracker GPS which I’ve been testing over the last week or so.

In Fig. 3 (below), you can see my early burst of training in January 2012 and the subsequent plateau where I became unwell contrasted with this year’s steadier climb. I’d hope to catch up with myself at some point in June (when I will be attempting my 6 hour qualifying swim for my Round Jersey Solo in July) and continue with both pool and open water training for the rest of the summer.

All going well, I should finish the year with 1,000 km or thereabouts. But, as we all know, it’s not really the mileage that counts but the quality of the training and I think that whatever mileage I eventually finish up with for 2013 will be of much better quality than that of my 800 km of struggling about last year…

Tip: Never underestimate the power of Microsoft Excel as an analytical training aid!

I’m really struggling for writing material at the moment so I just thought that I’d do a quick comparison between how my training was going this time last year and how it’s going now. Here’s a quick bar chart (my liking for charts and graphs of all kinds will become apparent in future posts): 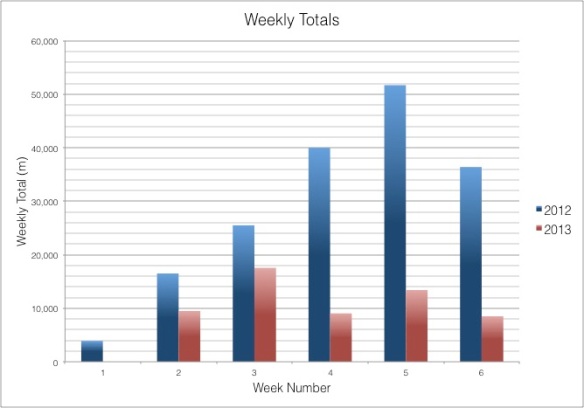 2011 was a bit of an off year for me with my Leaving Certificate exams in June and my first semester at University College Cork from September to December. In January 2012, I found myself unexpectedly climbing up the mileage ladder on an almost daily basis. The fourth week of January was a 40 km week, which was a good week for me even when training for my English Channel swim in 2009. The next week, I managed over 50 km, including a 25 km pool swim on my birthday and a lap of Sandycove Island. This was my longest week ever!

However, this sudden increase in training volume took it’s toll and weakened my system enough to get a bad bout of tonsillitis. My training subsequently collapsed and weeks passed when I did not swim at all. I eventually got over it and had a great summer…

Since the middle of September 2012, my training has been lower in volume but I’ve been much more consistent and have been getting more value out of it. From the chart above, I’ve been doing very little until now (with college work, etc.) but I won’t be crashing and burning as I did last year. Hopefully, this will stand to me in the long run!

There was an error retrieving images from Instagram. An attempt will be remade in a few minutes.