This week entries opened for two great swims this June. On the evening of Friday, 14 June, the Martin Duggan Memorial Swim will take place over a 2 km course on the River Blackwater in Fermoy. This swim began as the Blackwater Swim in 1999 and, 10 years later, changed its name in memory of Martin Duggan, a local schoolboy who drowned tragically in the river on 12 July 2012. All information relating to entry criteria, etc., can be found on the event website (linked above). One aim of the swim has been to encourage people of all ages, but especially young people, to take part in open water swimming and learn to enjoy swimming outdoors in a way that is safe. Another aim of the swim is to show the people of Fermoy that our beautiful River Blackwater is not something to be feared and avoided, but rather something to be respected and enjoyed. 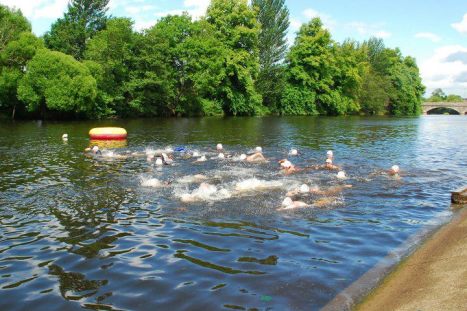 The second wave of 2 km swimmers during the in-water start for the Martin Duggan Memorial Swim in 2010.

Any money left over after the all of the costs of running the event have been covered are donated to the Blackwater Sub-Aqua Club Search & Recovery Unit who are based here in Fermoy and who have provided great support for this swim over the last few years.

The crowd just before the start of the Church Bay Swim in 2012. I believe that I came third in this race, behind Chris Mintern and Ned Denison.

Despite the protracted winter and ever-elusive spring, their is a great sense of optimism about the 2013 open water season with some new events being created and existing events raising their profiles. Let’s hope it lives up to expectations!

1 thought on “Entries open for two great swims in June…”