I’ve done virtually no open water swimming so far this year. I did a quick dip in Sandycove a few weeks ago which I wrote about in My first sea swim of the year… but nothing else since. I’ve been trying to concentrate on my fitness, etc. in the pool and worry about the open water when it [eventually] warms up enough to be able to do proper swims. For the last few years, Dave Mulcahy and I have been aiming to be back in the Blackwater for about St. Patrick’s Day. Though it has been a cold March so far, Dave and I decided that we’d better get in before we put it off for another month! 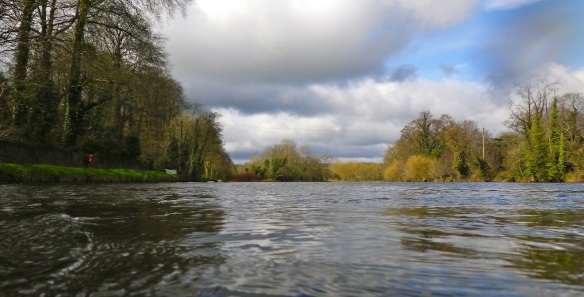 First river swim of the year in the Blackwater on St. Patrick’s Day.

So just before the parade on Sunday, we headed down to the Rowing Club where we got changed. It was to be my first time to use the new slipway, which is not quite finished but suitable for use. Dave had already had the privilege of using the new slipway, and was among the first to do so, during the Fermoy Christmas Day Swim last December. It was a dry, bright morning but a cool one at the same time. There was a slight westerly breeze, which was a nice change from the chilling north-easterly which we’d had for the last week or so. Another nice change was being able to walk all of the way into the water, a much easier entry than we previously had!

My first few strokes felt good, even if I found it a little hard to take a breath. I decided that it would be better to lift my head up for a few strokes and then go back to normal swimming again. After a minute or two, my hands and feet became quite sore, as did my face. I felt like getting out but then thought of my ice swimming friends and other, colder swims that I’d managed before and decided to keep calm and keep swimming. After about 200 m, which took about 6 minutes swimming against the current, I decided that I’d done enough and decided to head back to the slipway at my ease. 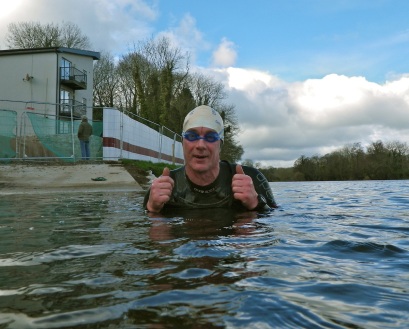 Dave on the new slipway at the Rowing Club on St. Patrick’s Day 2013.

Dave turned at the same time as me and we arrived back at the slipway having swum for about 10 minutes. Dave and I estimated the water temperature at about 6ºC so I was pleased enough to have done 10 minutes at that temperature. Hopefully, it will start warming up soon and we will be able to do longer swims!

As Nuala Moore often reminds me, the swim isn’t over until you are dry, dressed and regaining body heat. On this occasion, I managed to get dressed reasonably quickly (this was a great achievement for me) and my feet, which were very painful on exiting the water, starting to warm up pretty quickly. Things didn’t go so well for Dave, however, who discovered that his pants were locked into the Rowing Club! He then had to endure the walk of shame back to his car and drive home to ask Brigid, his wife, to collect them from the clubhouse after the parade. He won’t make that mistake again…

It was an enjoyable swim, all in all, and it feels good to have finally been in the river. It can only get warmer from here and, hopefully, I’ll start to see the results of my winter “quality rather than quantity” training in the pool.